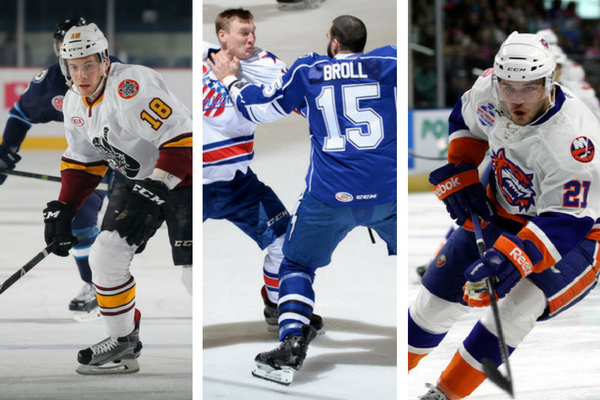 Broll, 23, had two goals, eight points and 112 penalty minutes in 60 games with the AHL’s Syracuse Crunch last season. The six-foot-three, 234-pounder was drafted in the sixth round (152 overall) by the Toronto Maple Leafs in the 2011 NHL Entry Draft.

Coderre-Gagnon, 23, registered three goals, six points and 163 penalty minutes in 56 games with the ECHL’s Tulsa Oilers in 2015-16. The Montreal native was undrafted after a three-year stint in the QMJHL.

Veilleux, also 23, collected eight goals and 23 points in 72 games with the AHL’s Chicago Wolves last season. The St-Hippolyte, Quebec native was drafted in the fourth round (102 overall) by the St. Louis Blues in the 2011 NHL Entry Draft.