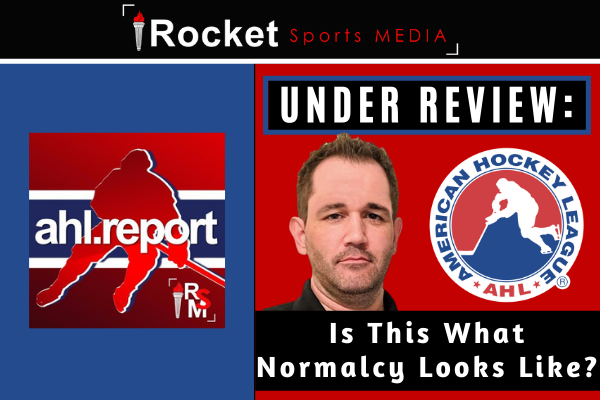 ROCKET SPORTS MEDIA — Do we dare to dream?

Is normalcy back in the American Hockey League? Or will the COVID-19 pandemic again spike and create a most unwelcome disruption for the second-best league in hockey?

Day-to-day uncertainty is reality for AHL teams and head coaches. But a stretch from mid-December to early February tested even that well-worn patience. When the NHL imposed taxi squads on AHL clubs following the Christmas break, the move rocked the AHL.

AHL teams can handle taxi squads and did so quite deftly throughout the 2020-21 season. But last season they had advance notice. This season’s decision to reinstate taxi squads in December following a remarkable surge in COVID-19 cases was something different altogether. AHL clubs had relatively little time to prepare.

And even with time to prepare, really, what could they do?

When the NHL team summons a player, the player goes. That can include the morning of a Calder Cup Playoff game.

But when five or six players are recalled at once? Especially a number-one goaltender, a couple of top forwards, and two blueline anchors?

There is no template for that, and even the most patient coaches had that calm tested. One coach spoke of not even having a morning special-teams meeting because he had no idea who would actually be in his line-up come 7 p.m.

And of course the normal rhythms of a season continued, taxi squads or not. Players suffer injuries. Slumps happen. Games pile up on the schedule, especially with a crush of December postponements that needed a new home on the AHL calendar.

The Syracuse Crunch went three weeks without a game (and had five games between Nov. 27 and Jan. 5). When they returned to action, they immediately had three games in four nights.

In Laval, the Rocket did not play between Dec. 17 and Jan. 12. Then they returned with their own three-in-four stretch, only to see another batch of games set for the second weekend of their return scrapped.

Through all of this upheaval, the Rocket, Belleville Senators, Manitoba Moose, and Toronto Marlies played to closed or nearly closed buildings for weeks. Aside from the eerie quiet that such an atmosphere creates, teams take a hit at the box office in a season in which it had been hoped having fans back would offset at least some of last season’s financial damage.

But at long last, some normalcy is returning on the ice. And equal importance that normalcy will resume off the ice, particularly for those AHL clubs that have played in empty buildings. Belleville welcomed a limited number of fans back to CAA Centre last weekend. Laval’s Place Bell will again see fans, Rocket play-by-play voice Anthony Marcotte reported Wednesday night.

The AHL extended the regular season by six days to give teams some additional scheduling flexibility with postponed games. Even so, several clubs will face grueling schedules down the stretch.

Then the Calder Cup Playoffs are scheduled for May and June. For the first time since June 2019, when then-Charlotte Checkers captain Patrick Brown lifted the Calder Cup, we should see the AHL’s top symbol of excellence paraded around the ice. Maybe by the Utica Comets? The run-and-gun Ontario Reign? Or their Pacific Division rival to the north, the Stockton Heat? The loaded Chicago Wolves? The under-the-radar Hartford Wolf Pack or Manitoba Moose? One can never count out those Hershey Bears, either.

Or some other team? Maybe Syracuse comes together to make a run. Or the Providence Bruins or the dangerous Bakersfield Condors or Colorado Eagles?

Again, do we dare to dream?