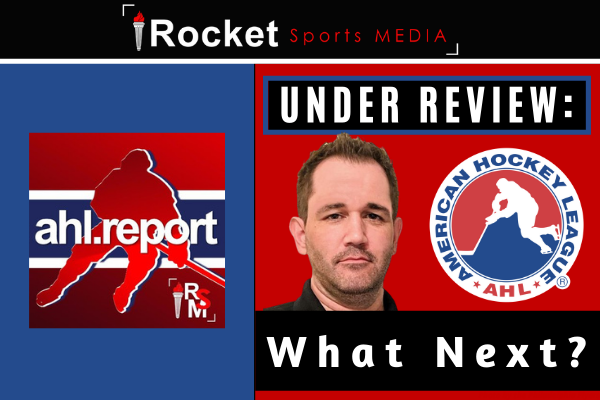 ROCKET SPORTS MEDIA — What a month December has been for the world, the American Hockey League very much included.

The ongoing fight with COVID-19 and its latest variant unfortunately means that the world finds itself in a stalemate that seems to be in complete gridlock. The issue has three main players:

● Viruses do as they wish, at least until some outside force disrupts their activity.

● People who are opposed to COVID-19 vaccines have shown little inclination to change their minds. Other than a recent bump created by expanding vaccination programs to children between the ages of five and 11, vaccination rates have not budged sufficiently for months.

● The third group consists of the governments and large chunk of populations around the world concerned to one degree or another by COVID-19. These groups also do not appear to be willing to soften their opposition.

So, absent an outside – and heretofore unknown – force that somehow breaks up this traffic jam and forces someone’s hand, where does this situation go next? And what is the impact on the AHL as a bystander in this mess that is now approaching its two-year mark? Here are some of the ongoing issues that the league faces:

The Canadian government has again tightened border rules, though the rules never had loosened all that much. Anyone crossing into Canada, Canadian citizens included, must present a negative PCR test taken within a 72-hour window. This requirement is not negotiable, and woe to anyone who shows up at the border without this test and related information fully in order.

Obviously this requirement poses a significant challenge for several AHL clubs that move back and forth across the border on a regular basis, sometimes even multiple times in a given week. With a variant that can sweep across a team quickly, what does a Canadian team do if it has an outbreak occur while in the United States? What about moving players back and forth between an NHL team and its AHL affiliate? These potential situations are a massive consideration for any club.

Postponements can break up what had been a carefully designed road swing that hits several cities in close proximity. Take the Springfield Thunderbirds, whose tidy Friday-Saturday swing to Rochester and Toronto was scrapped earlier this month. While the Thunderbirds were able to tack on the Toronto game to a separate Belleville trip, the Rochester game is now a single-game trip (and that was really the only option).

Situations like these produce extra wear and tear on players and potential increased expenses for teams that have been facing financial pressures for 21 months and counting.

NHL taxi squads last season drained the AHL of some of its best talent, and their demise this season has restored the AHL’s caliber of play to its normal high standard. This issue appears to remain murky, and for many reasons everyone is hoping that this variant will ease up on the world as soon as possible.

More frequent testing is another cost that must be borne by one party or another. Those tests do not come cheaply, either. Last season the cost for high-end testing was more than $100 per test. Do the quick math with that number, and the result is not pretty. With 25 or so players, multiple coaches, and additional staff to test, those costs escalate quickly.